If your experimental data can be described as “1D continua” (or “1D fields” or “1D trajectories”) then Statistical Parametric Mapping (SPM) may be an appropriate statistical methodology for you to consider.

This basic procedure is identical for all tests, and all test statistics.

For simplicity this document will consider just one dataset and one test.

The following commands execute a complete one-sample t test for a set of randomly-generated 1D continua. We shall consider these commands in more detail below.

The results are depicted in the figure below.

This example is considered in extended detail below. 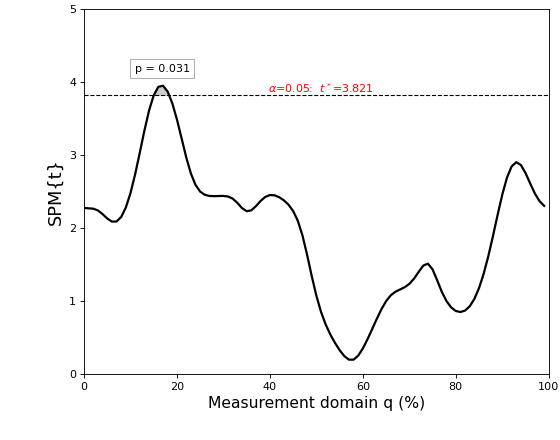 After executing these commands Y will be a (10 x 100) array containing ten separate continua, each of which has been sampled at 100 separate nodes.

The data can be visualized as follows: 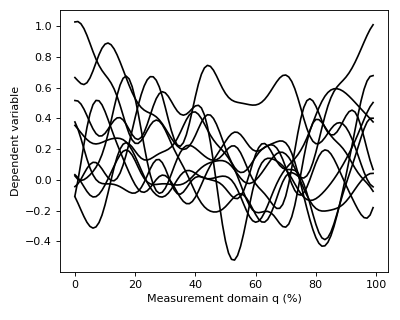 Mean continua can be visualized along with standard deviation (SD) clouds like this: 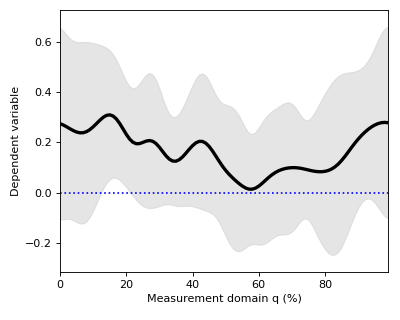 Although the mean minus SD exceeds zero in the vicinity of q = 18%, implying that this is the strongest signal, this observation has no probabilistic meaning.

For objective reporting we need to quantify the probability that random data would produce a signal as large or larger than this signal, given the variability.

However, before computing that probability we need to compute a test statistic, which has known probabilistic behavior in an infinite number of experiments.

In spm1d you can compute the test statistic for the one-sample t test as follows:

The result t is a 1D test statistic continuum, or equivalently a “Statistical Parametric Map” (SPM), denoted “SPM{t}”. It can be visualized as follows: 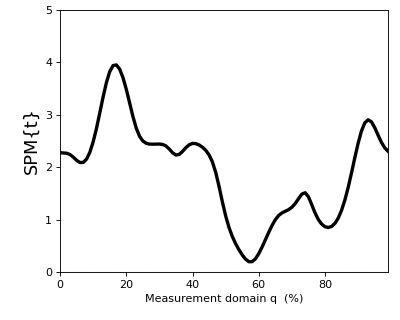 In addition to visualizing the results, as in the figure above, you can also probe SPM attributes as described in Test outputs.

In spm1d statistical inference is conducted separately from test statistic computation as follows:

We have set an a priori Type I error rate of alpha = 5%. If the data are 0D scalars, and if we have conducted a t test, then alpha maps directly to a single critical t value, which we shall denote t*. If the observed t value exceeds t*, then from a classical hypothesis testing perspective the test is said to be significant at a Type I error rate of alpha. Similarly, alpha also maps to a generally different threshold t* when the data are 1D continua. In the 1D case, alpha pertains to the maximum t value across the entire continuum, and ensures that random continua reach t* with a probability of alpha.

The inference SPM{t} can be visualized using:

Alternatively you can plot p values manually using pyplot.text, like this:

You can also probe inference results interactively as described in Inference SPMs.

The resulting figure (below) depicts the raw SPM{t} along with the alpha-based critical threshold t* and the probability value associated with the suprathreshold cluster. 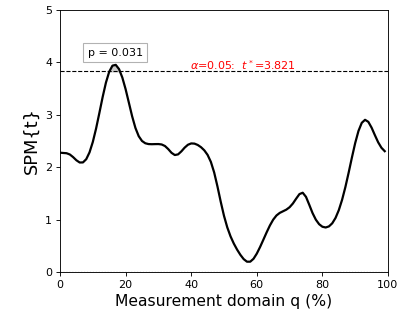 The probability that smooth random continua will produce an SPM{t} that reaches t* is precisely alpha. If the test statistic continuum just touches the critical threshold, then by definition the p value is alpha. As the test statistic continuum traverses beyond the critical threshold, as in the example above, the p value gets progressively smaller. The p value specifies the probability that smooth random fields would produce a suprathreshold cluster as broad or broader than the observed cluster, where “broad” refers to the width of the cluster relative to the width of the whole continuum.

Do not misinterpret alpha, t* or p values as descriptive elements of a particular dataset. Instead they describe random data behavior.